The triple point of water (TPW) is not only the most accurate and fundamental temperature standard available, it’s also one of the least expensive and simplest to use.

Third, for users who characterize probes using ratios (that is, they use the ratios of the resistances at various ITS-90 fixed points to the resistance of the thermometer at the triple point of water, indicated by “W"), interim checks at the triple point of water allow for quick and easy updates to the characterizations of critical thermometer standards, which can be used to extend calibration intervals.

Good triple point of water cells contain only pure water and pure water vapor. (There is almost no residual air left in them.) When a portion of the water is frozen correctly and water coexists within the cell in its three phases, the “triple point of water" is realized. Fluke Calibration water cells achieve this temperature with expanded uncertainties of less than 0.0001 °C and reproducibilities within 0.00002 °C.

In simple terms, water cells are made from just glass and water, but there’s much more to it than that!

For starters, that’s not just any water in there.

The oxygen atoms found in most water are predominantly comprised of eight protons and eight neutrons (16O). Some oxygen atoms, however, have an extra neutron (17O) or two (18O). Similarly, the hydrogen atoms in water normally contain only a single proton (1H), but sometimes contain a neutron also (2H), resulting in “heavy" water. These isotopes coexist in varying proportions in ocean water, polar water, and continental water, with ocean water being the heaviest.

The ITS-90 recommends that water cells be made from water with “substantially the isotopic composition of ocean water." Research has shown that TPW errors associated with isotopic composition can be as large as 0.00025 °C. The uncertainty contribution from VSMOW errors in a Fluke Calibration cell is less than ± 0.000007 °C. That’s seven micro-Kelvin!

Fluke offers two options for verifying the isotopic composition of any purchased water cell, both at nominal costs. We can submit to a testing laboratory a sample of water taken from your own cell (after it was completely manufactured, so you get a valid comparison) and give you the test report. Or we can send that water sample to you in a sealed ampoule for you to conduct your own tests. We can even provide multiple samples from the same cell (virtually as many as you’d like) so you can check for changes over time.

Further, the potential for errors due to water impurity is even greater than the errors from isotopic composition. Fluke Calibration cells undergo multiple distillation processes and utilize special techniques to retain water purity. Among other things, our primary standards scientists are able to connect quartz cells directly to the glass distillation system without using coupling hardware that may invite contamination.

Most Fluke water cells may either be purchased with borosilicate glass or with fused silica (“quartz") housings. What’s the difference? Glass is less expensive than quartz, but it’s also more porous, allowing impurities to pass through it over time. Research indicates that cells made from glass typically drift about 0.00006 °C per year.

Fluke cells come in four general sizes. Models 5901A, 5901C, and 5901D each come in either quartz or glass shells and include 265 mm of thermometer immersion depth. The primary difference between these models (other than the arm on the 5901A) is the inside diameter of the probe well. (See the cell dimensions on the specifications tab and note that the inside diameter of the 5901C cells varies with the shell material). A variety of baths are available, which can maintain the triple point within these cells for many weeks. Accredited (NVLAP) test certificates are available with any cell under our model 1904-TPW.

5901A cells include an arm that can be used as a handle, a hook, or a McLeod gauge to demonstrate how much residual air is trapped in the cell. Carefully developed manufacturing processes at Fluke keep the air bubble in a quartz cell as small as the air bubble in glass cells. A fourth size, the 5901B cell, comes in a glass version and is significantly smaller than the other cells. It is designed for use in our 9210 Maintenance Apparatus, which automates the realization and maintenance of the TPW. The 9210-5901B combination is perfect for both calibrating thermometers and providing periodic checks of sensor drift. 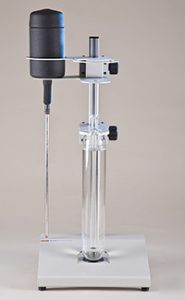 or simplest realization of the TPW in our larger cells, the 2031A “Quick Stick" Immersion Freezer uses dry ice and alcohol to facilitate rapid formation of an ice mantle within the cell without requiring constant intervention while the mantle forms.

Insurance is also available for each water cell purchased from Fluke. Water cells are not difficult to handle nor is the TPW difficult to realize, but they are delicate and accidents do happen. For a nominal fee, we’ll insure your cell in one-year increments. If something goes wrong, just let us know and we’ll replace your cell. No questions asked.

There is no tool available to temperature metrologists more valuable than a reliable triple point of water cell. Fluke Calibration cells use the right water, right enclosures, and right manufacturing methods to ensure you get the best cells available in the world.

Accessories common to all models: